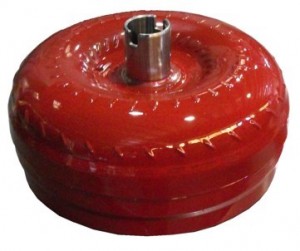 It has become well known that the original Range Rover Torque Converter is plagued with problems and is prone to premature failure as early as 50,000 KM, unfortunately, when this failure happens the debris from the Torque Converter often damages the pump and internals of the Transmission causing thousands of dollars’ worth of damage.

The most common cause of the Torque Converter failure is due to the Lock up clutch failing. When this occurs the particles spread through the Transmission and into the valve body, this can cause all sorts of driving issues from shifting problems to a catastrophic Transmission failure.

Here at Roadblaster High Performance Torque Converters we have resolved this issue by replacing the OEM Lock up plate with a billet plate that is 30% thicker than the original.

The Lock up Clutch is upgraded to a High carbon clutch and we have increased the surface area by 30%. The weak front cover that is only 4mm thick and only backed up by three pads that mount it to the flex plate that allows the original clutch to deflect under load has also been upgraded to a billet cover that is over 25mm thick.

This High Performance Billet Torque Converter can be ordered with the standard stall or a low stall version is available for serious off road applications.