Roadblaster is proud to introduce their latest 6L90E High Stall Torque Converter to suit the Holden VF 6.2 Ltr V8 which utilises the 6L90 Automatic Transmission. This 6L90E High Stall Torque Converter has been designed to allow the engine to get into its torque curve quicker and multiplies the torque as the vehicle begins to accelerate, this allows for greater throttle response, quicker off the mark launch than the stock converter. These converters keep your engine operating closer to its peak operating range thus giving you the performance you desire. 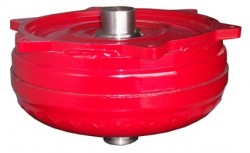 The 6l90 comes with other features that make it a superior transmission to the 6L80. It has the capability of adaptive shift controls such as engine braking, and driver shift control with tap up/down shifts.
A wide overall ratio spread of 6.04:1 allows a “steep” first gear, as well as very “tall” overdrive top gear for low-rpm highway cruising. With this wide ratio spread, acceleration is maximized, as is fuel economy. Engine noise is also lower during cruising. Both fifth and sixth gears are “overdrive” gears, for example.
As in the 6L80, gear changes from second to sixth gears are accomplished with clutch-to-clutch control, where an oncoming clutch is engaged and an “offgoing” clutch is released in a precise manner to achieve the ratio change. The first-to-second upshift, however, is a freewheeling action, where the second gear clutch engages while the first gear one-way clutch spins freely. This allows a greater degree of smoothness at lower vehicle speeds. The clutch-to-clutch shifting and single freewheeler allows significant reductions in packaging requirements.